[Author’s note: ‘That’s What He Said’ is a blog dedicated to the public interactions of District 48’s Representative Dana Rohrabacher with his constituents, the media, and the world.]

Like many of my fellow District 48’ers, I’ve been calling on Representative Dana Rohrabacher to hold a town hall meeting.

On Twitter he occasionally responds to the flood of requests with a few gems like these. (Note: Below are screen caps. Posts tend to mysteriously disappear from Rep. Rohrabacher’s social media accounts when he’s called out.) 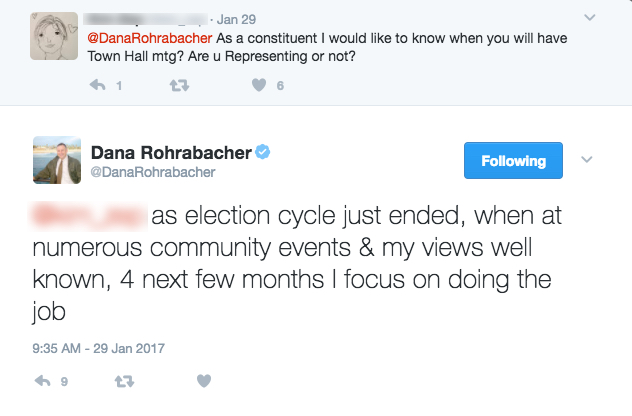 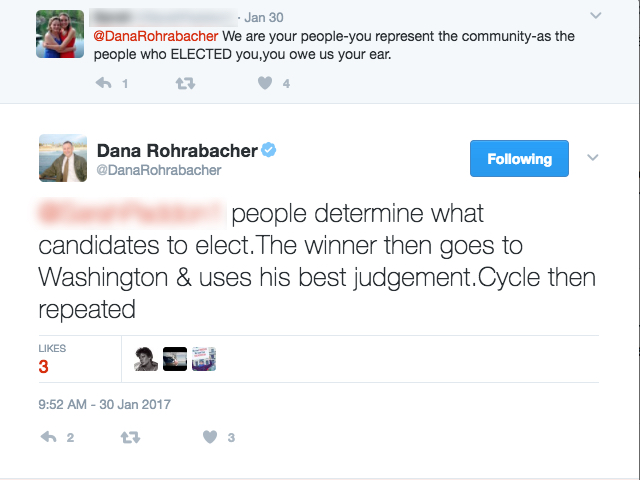 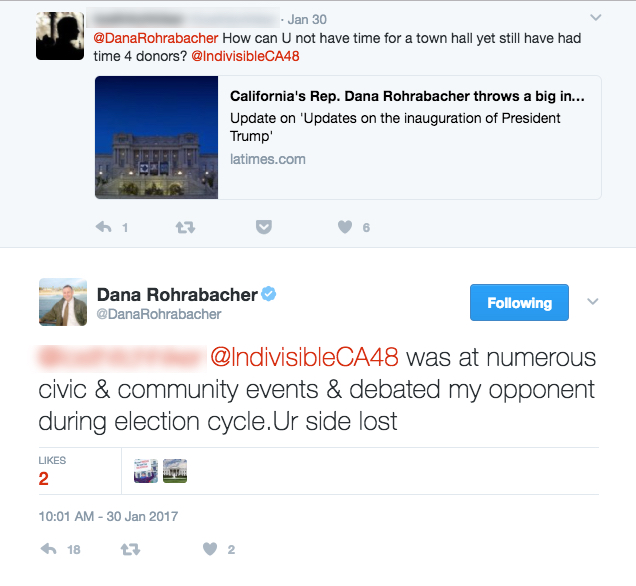 This is the beginning of a pattern with Rep. Rohrabacher where he attempts to ‘control the narrative.’ (For those old enough, it’s the ‘Choose Your Own Adventure’ of politics.)

He writes his own rules, such as, constituents are only allowed to talk to their potential representative during the election cycle.

Well, wouldn’t you know it? He’s already filed paperwork declaring his candidacy for 2018. 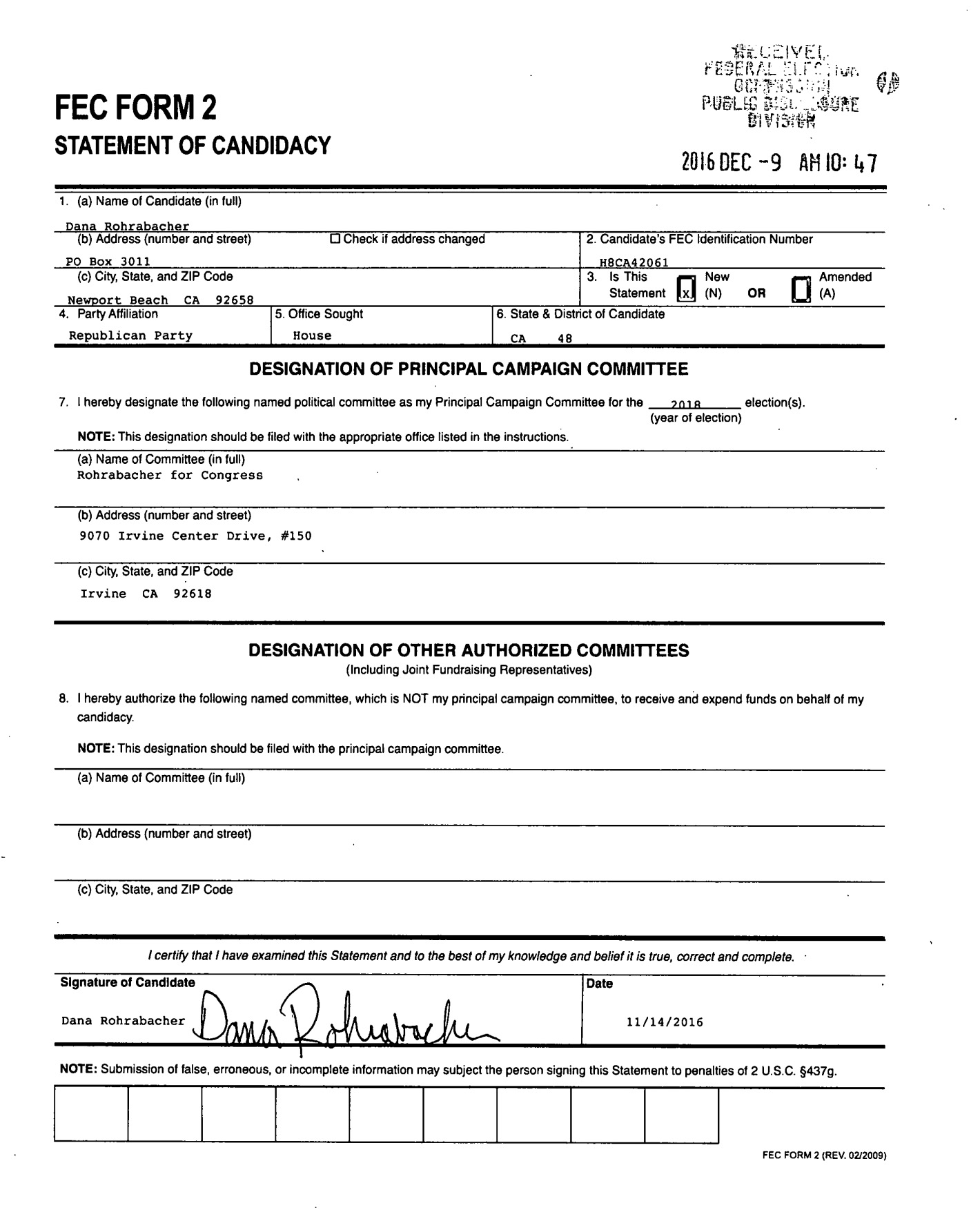 Yet, he seems to have forgotten that. Probably because it doesn’t fit into his current narrative of how he sees the opposition.

Take, for example, the events on Feb. 14 visit to Rep. Rohrabacher’s office. From ThinkProgress.org:

“… this Tuesday, as a 2-year-old girl slid a valentine under the door on Tuesday, one of Rohrabacher’s staffers opened it, hitting her in the head and knocking her to the ground.

“According to local reporting, one of the constituents then grabbed the door and tugged on it, causing 71-year old district director Kathleen Staunton, who was on the other side of the door, to lose her footing and fall. A spokesman for Rohrabacher’s office told media that she later fell unconscious and had to go to the hospital.

“In a video of the immediate aftermath, the little girl can be heard crying, as visiting constituents apologize, and one of them helps Rohrabacher’s staffer up. The door is then closed, and the group leaves.”

The site TalkingPointsMemo.org reached out to the Huntington Beach Police Department for corroboration:

“Officer Jennifer Marlatt of the Huntington Beach police department characterized the incident as an accident, and denied that she was transported to the hospital.

According to Marlatt, after the door swung open, hitting the 2-year-old “by accident,” protesters started yelling, “’You just hit a child.’ The staff member got scared and attempted to closed the door, but she was unable to as one of the other protesters was trying to keep it open so they could talk to her. As he pulled the door open, the staff member fell down.”

“The staff member who fell fainted while talking to police and paramedics were called. She declined to be transported,” Marlatt continued.”

To be fair after the article was published Officer Marlatt amended her original comment:

“The female employee stated she did strike her head and other parts of her body during the fall. She declined to be transported by paramedics, but she was transported to the hospital by her friend. This was written in the report. It was unknown what injuries the female sustained at the time of the report. I’ve been advised after going to the hospital, injuries were discovered.”

No further details have been released on this employee’s status. I know I’m not alone in wishing her a speedy recovery from this accident. Also, the child on the other side of the door is fine.

It should be noted the HBPD have not made any arrests in connection with what took place.

As for Rep. Rohrabacher, who was in Washington during the incident, his office issued a press release. (This is a screencap of the release to protect from mysterious disappearances.) 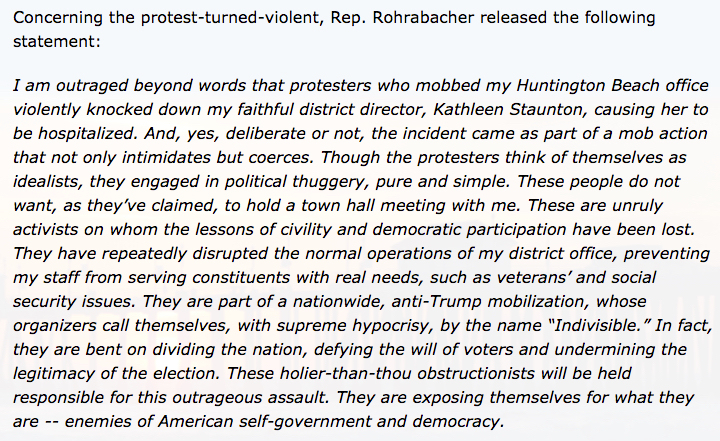 WOW. We have a ton of power, and thank you Rep. Rohrabacher for reaffirming it.

Why else would he attempt to control the public narrative with such an overreaction? Something the police – who were there – didn’t seek to arrest anyone involved on either side of the incident.

What this press release shows is that we’re getting to him.

Rep. Rohrabacher has grown far too comfortable with the fact he’s had a relatively passive district for many years. Now he’s feeling the heat.

Instead of acting responsibly and meeting with his constituents, he’s lashing out, clinging to the narrative that he is up against ‘thugs’ or as he tweeted to me, a gang: 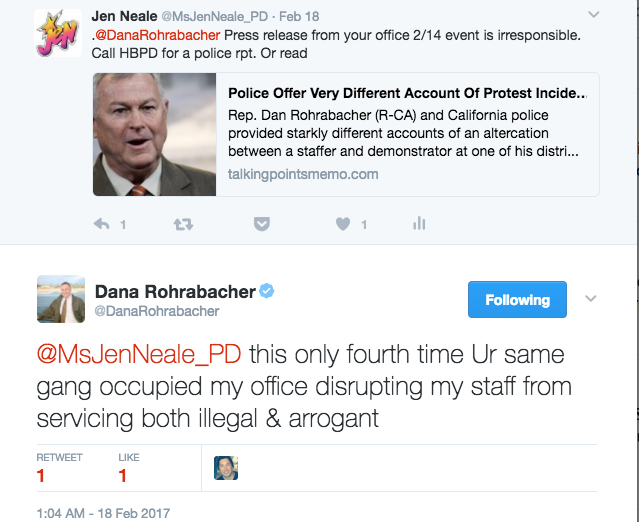 It’s a fine line we walk here as the Resistance.

This is especially true in District 48 where he have some of the richest citizens in Orange County. They’ll buy into the hype Rep. Rohrabacher sells as long as there are negative incidents for him to cling to.

He’s baiting us to come at him with threats and insults (in person and on social media) so he can paint us as an unintelligent group of bullies making his life difficult.

That’s not who we are. We control the narrative when we give him nothing negative to grasp at.

I’m reminded of a quote by Captain America from Avengers: Age of Ultron.

As the Avengers prepare for battle Cap says, “Ultron thinks we’re monsters, that we’re what’s wrong with the world. This isn’t just about beating him, it’s about whether he’s right.”

Dana Rorabacher is our Ultron and we are the Avengers. I know it sounds silly but let’s replace a couple words in Captain America’s speech.

“Rohrabacher thinks Indivisible are monsters, that we’re what’s wrong with the world. This isn’t just about beating Rohrabacher, it’s about whether he’s right.”

Be the good we want in the world. Be better than him.

When one believes so strongly about something, it’s easy to get caught up in only our side of the facts. We listen to people who agree with us and automatically look to discredit those who don’t. I am guilty of this daily.

Take a minute when having a discussion to make sure you’re considering all sides of an issue. Try to see the other person or group’s point of view. It’ll help you craft a better message in the long run.

Jen Neale is a resident of Costa Mesa. She’s a paid sports journalist, and thanks to Donald Trump, is now an unpaid political activist. In addition to making phone calls, sending emails and attending protests, writing a blog for Indivisible OC is how she adds to the #Resistance.